‘Burn with me.’ Chris Chibnall graduates from Torchwood to Doctor Who with a script that’s efficient and effective. There’s a slight sense of Bob Baker and Dave Martin in the monster’s repeated mantra, ‘burn with me’, and you can squint to see bits of Dragonfire (Korwin’s face-cradling touch of death) and Earthshock (Michelle Collins doing her best Beryl Reid hard-bitten space captain). There are moments that feel good enough to have been revisited in different contexts the following year (Martha and the Doctor silently communicating through windows is repeated as farce with Donna in Partners in Crime; the conclusion of McDonnell hurling herself out of an airlock with the monster recurs in Midnight – which in some respects feels like RTD rewriting this to focus on the best element of the Doctor being possessed by the monster). You wouldn’t necessarily guess this was by a future showrunner, but you could say the same about The Krotons.

Chibnall’s weaknesses – particularly his tendency to construct episodes that are just a bunch of stuff that happened rather than a satisfactory “therefore/but” storyline – aren’t apparent, largely because the relentless linear structure doesn’t lend itself to plotting cul-de-sacs. If you nit-pick, the spaceship is a pretty contrived environment, consisting of inconveniently-located buttons just out of reach and an absurd number of pub-quiz activated doors. But that’s harsh on 42 when Doctor Who has always had similar contrivances (like a plug on the wrong side of a gantry on a radio telescope). 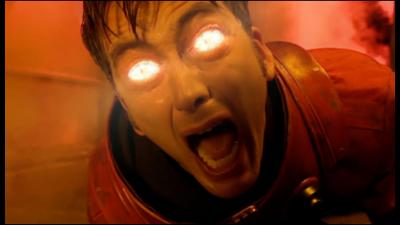 I think this works just fine. It’s an ideal script for Graeme Harper, who brings some nuance to the more macho bits, and sets the right rhythm for the piece. It’s a pity he’s going to do an even better job with similar material in a month’s time, but that’s a criticism for including 42 and Utopia in the same series, not a problem with this episode. It’s not a subtle, complex or character-rich episode, but it has energy and gives Tennant something different to play as the Doctor is genuinely afraid. The connections to the Saxon arc land the point that Francine is in league with the Doctor’s enemies, which alongside Martha’s latest display of faith in the Doctor lays more groundwork for the season finale.