‘I can survive anything.’ Almost a different show, this feels less like a sexy version of Fringe and more like a 21st Century reimagining of Quatermass, with a Nigel Kneale-ish streak of brutality. The cold open, children encountering what looks like an alien spaceship in 1960s Scotland, flips to present-day Cardiff and Gwen going about her business while around her kids on the way to school suddenly freeze and without much preamble we’re straight into the story.

The serialised structure also seems like a step forward from Torchwood Series Two. Suddenly, this looks like something that might fit in the streaming era, with no immediate answers just a lot of intriguing set up. There are aliens called the 456 who are returning at the same time as a slow-burn conspiracy to destroy Torchwood, using Jack as a creative weapon, comes to fruition.

In between, this still feels like Torchwood because these events are juxtaposed with domestics: Rhys and Gwen, trying for a baby and looking at houses; Ianto, squabbling with Jack about their relationship status and meeting up with his sister, and Jack inserting himself back into his daughter’s life because he thinks having access to his grandson might be useful in current circumstances.

Around this, the supporting cast is excellent. Peter Capaldi plays career civil servant John Frobisher as a competent man pulled into something human competence can’t even countenance. Paul Copley is a plausibly damaged man who saw something as a child that has left him broken. Cush Jumbo, of The Good Wife/Fight, is the temp whose first day becomes a nightmare. Rik Makarem looks like he’s going to fulfil the role of the absent Freema Agyeman but gets to do something more interesting instead.

As if the story itself hasn’t raised the stakes enough, the climax, with Gwen realising she’s pregnant just at the point the Hub is torn apart, is apocalyptic – and this is just the first cliffhanger. This is as gripping as Torchwood has ever been. 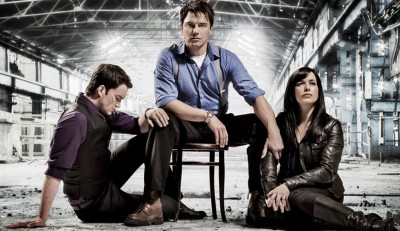