‘I think things are coming to a head’. Modern shows often feature a “night before battle” episode that refocuses on the characters before the end – think Game Of Thrones‘ A Knight of the Seven Kingdoms, for instance. Episode Five reminds me of one of these. After a brief foray by the Yeti, which topples the huge Buddha in the courtyard, a humbled Khrisong admits defeat. The focus then turns to the evacuation of Detsen Monastery. There’s something very moving about this: in a short time, these monks have been established as men of peace, gentle and kind. Seeing them turfed from their home gives the story personal stakes beyond the “end of the world” (in fact, at this point there’s nothing to say the whole world is in danger). 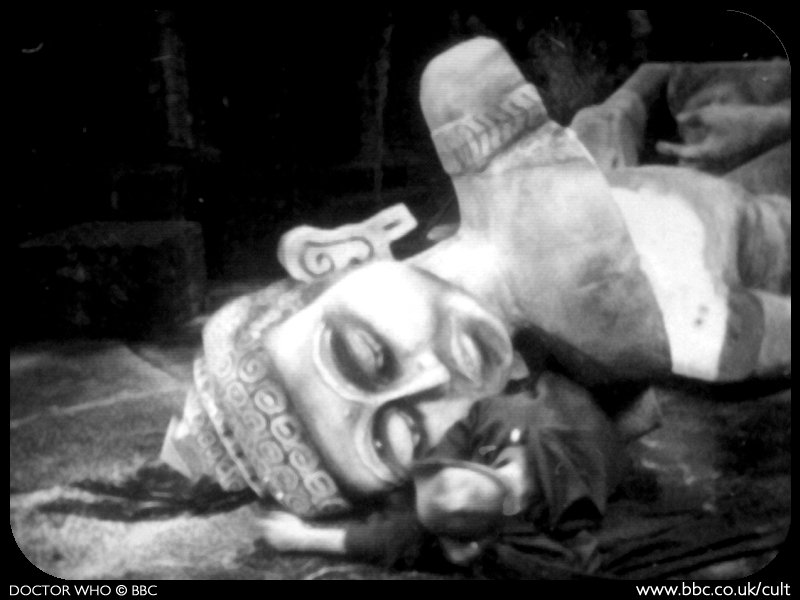 It’s surprising that we’ve reached this far without the story really having a villain. The end of Episode Four seemed to promise a showdown against Padmasambhava, but at least at the start of this episode he’s still gentle with Victoria, and keen to make the monks and their British guests leave Detsen – when he could just as easily order the Yeti to kill them all. He even goes to the lengths of mentally controlling Victoria to try to manipulate the Doctor into leaving (which results in the Doctor de-programming her, just like he did Dodo when WOTAN took over her mind. The 10th Doctor’s mind-wipe of Donna isn’t without precedent).

And when the Doctor finally confronts the master, even then he doesn’t become a ranting megalomaniac. Instead, he seems a hollowed-out old man, weary of his connection with the Great Intelligence, and on the brink of death. But his description of the Intelligence is less than encouraging, and adds to the sense of a formless, creeping terror from beyond setting its mind on Earth:

Any suggestion that the Intelligence, rather than Padmasambhava’s influence, is behind the benevolent tratement of the monks should be dispelled by Travers own sense of what what he felt on his visit to the cave on the mountain: ‘A feeling of evil. Like a shadow on my mind.’ And as the Season Five foam machine begins to pour forth from the cave mouth, things very definitely seem to be coming to a head.