Due to problems with Brian Hayles’ scripts, apparently script editor Terrance Dicks wrote episodes three to six of the serial. Certainly, while it’s quite entertaining this is very thin stuff, replaying a lot of the more effective moments from the first two episodes – such as the vaporisation of an attacking Ice Warrior by solar power, and lots more scenes of the Doctor, Jamie and Zoe trying to fly a rocket – rather than genuinely advancing the story.

Fortunately, the regulars are old hands at putting the effort in to lift fairly threadbare material, Dicks is a strong enough writer to include some good lines (the Doctor’s declaration of his genius, and his stern exchanges with Fewsham are very good). And Michael Ferguson again wrings everything he can from the material, making the moonbase look bigger than the sets probably were through some fast cutting and dropping in little touches like an infinity mirror shot. Having the Doctor scampering around, running back and forth across the frame, is very Love & Monsters, and the Ice Warriors look impressive looming suddenly at the end of corridors. But there’s only so much drama you can wring out of people pressing buttons very urgently. 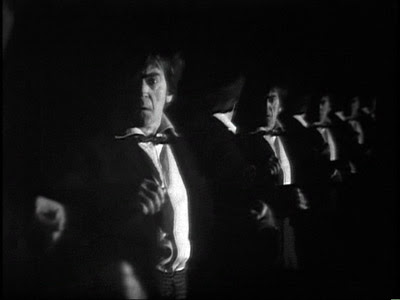 The episode’s big reveal is the Ice Warriors’ means of invasion. Lacking the forces to invade and overwhelm the Earth, they’ve decided to use T-Mat to transmit their weird seed pods (on fancy stands) to all of the major population centres – Ottowa, Oslo, Stockholm and Hamburg (which sound like the venues for a Britpop comeback tour). The Doctor is quickly incapacitated by one of the pods – which look like miniature versions of Rover from The Prisoner – presumably so he can take the next week off, perhaps to cultivate his impressive-looking sideburns.

Next episode: The Seeds of Death – Episode Four