You can tell things are getting serious because Greg’s taken his suit jacket off. This is a very fast flip to the end of the world, which leaves me wondering when the Doctor worked it out – as he definitely hasn’t been warning about it all along. Was it literally only when he looked at the computer readings at the end of Episode 4? Has something been triggered in his mind by the ‘sound of the planet’? We just don’t know.

But we can see how everyone reacts in character: aside from being a bit defeatist about the chances of saving this parallel Earth the Doctor is quite practical; Greg uses it as an opportunity to openly rebel, and to crack through Petra’s brittle defences as ruthlessly as the drill cracked through the planetary crust; the Brigade Leader snaps. Rather than going straight for explosions and special effects, the script instead focuses on reactions to the disaster: incomprehension, hysteria, denial. For all they might be a world of authoritarian ‘zombies’, Houghton makes us care about these people – apart from the Brigade Leader, who has none of the Brigadier’s bravery and coolness, and Benton, who gets turned into a werewolf in any case, they’re close enough to “our” versions. And suddenly the story becomes less about how the Doctor’s going to escape totalitarian Britain and more how he’s going to get back to our world and stop history repeating itself. 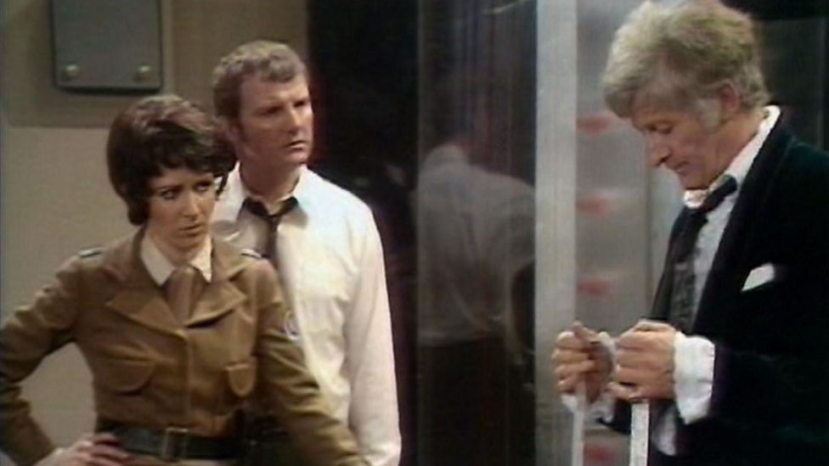 His demonstration of the TARDIS (or at least a very important part of it) to the Brigade Leader and Shaw, and his refusal to lie to them about his chances of saving them, are different facets of the Doctor. Both his previous incarnations might have been expected to obfuscate, or put off having the discussion, but this Doctor is completely up front. He’s not going to be able to save anyone here – but he can save a whole other planet. It’s sort of admirable, but also a bit dim: he’d have been better off leaving this inconvenient truth until after the console was hooked up to the nuclear reactor.