‘Do you want to end your lives fighting like animals?’ asks the Doctor, as the parallel Earth explodes around them all, a scene that, consciously or not, replays almost the same way as in Survival. The reputation of Inferno is significantly enhanced by this episode which briefly but shockingly presents the apocalypse on a BBC budget in a way that’s every bit as horrible as in Threads. A man sits, shell-shocked, as the planet cracks open. Soldiers run about aimlessly. Fire bursts from the ground, and everything is bathed in hellish orange light. 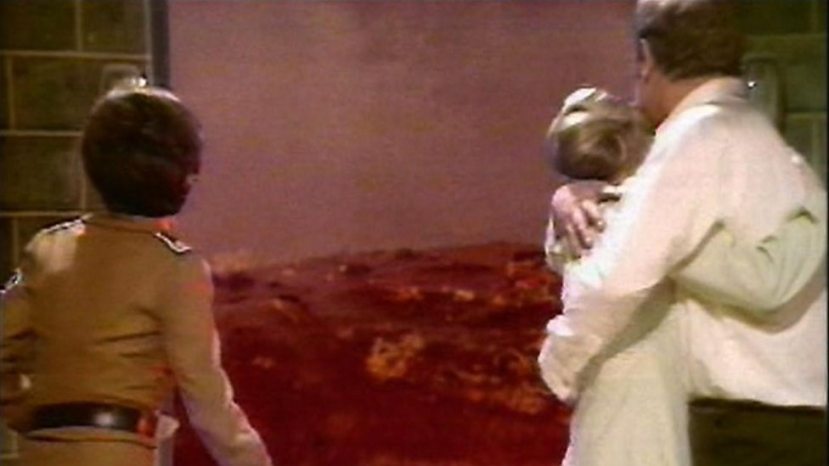 This is the fate that is waiting for “our” Earth if the Doctor doesn’t get back in time to stop Penetration Zero. Houghton’s script cut between both universes, as the Doctor races against time in one, the Brigadier tries to buy time in the other. He even finds time for a wry joke as Stahlman (or “Stall-man” as Nicholas Courtney insists on saying it) dismisses our Benton as an ‘ape-like minion’ while in the parallel universe that’s literally what his counterpart has become. There’s also a sweet, inessential little scene between Greg and Liz where we see how much Liz misses the Doctor.

Back in the parallel world, her counterpart is undergoing a Damascene conversion. It may be too late for her to do much about it, but the Doctor’s influence has had an effect on Shaw. She’s a sudden convert to democracy, telling the Brigade Leader he’s been outvoted. She decides the Doctor has been telling the truth all along, and her increasingly sour looks at the crumbling Brigade Leader are a brilliant non-verbal performance by Caroline John. At the last, she kills her former leader to give the Doctor a chance to save himself, and a world of people she’ll never meet.

While it’s largely a pretty serious, grim episode there’s some fun: using fire extinguishers instead of guns is a lovely idea, as is the Brigadier’s winding up of Benton. But by and large this is the wallop the story needs to push it from being another very good Season Seven serial to being something really special.