After the last serial featured a deserted London and attempt to roll back time to a pretend golden age, Death to the Daleks focuses on the search for a vaccine to a plague. It’s all a bit too close to the bone for my liking. This is an excellent, atmospheric opening: a misty, barren quarry; the TARDIS in darkness; loads of handheld camera work and some imaginative fades between scenes (the discussion of a photograph of the Exxilon city transitioning to Sarah Jane outside it). Michael E. Briant is no stranger to quarries posing as alien planets: he directed Colony in Space, which similarly featured a species of “savages” ruled by their High Priests in an ancient city, but his style has developed in the intervening three years and this looks as strong as the show has ever been.

As a horror film fan, I particularly enjoyed all the creepy touches. When the Doctor and Sarah venture out of the darkened TARDIS onto the crepuscular surface of Exxilon, a hand in the foreground of the shot indicates they’re being observed. The Doctor wanders off to explore, and is attacked on the sands by a figure seemingly made of crumpled linen, in an image ripped directly from M. R. James’ Oh Whistle And I’ll Come To You. Meanwhile, Sarah has gone back inside the TARDIS to change out of her beachwear (something for the dads, and a change from the trouser suits she’s previously worn). Startled, she closes the TARDIS doors – but we know she’s locked the monster inside with her, and it proceeds to attack her via a POV shot (linen draped across the camera lens) in exactly the kind of sequence John Carpenter uses in Halloween, before she beats it back with a crank handle. 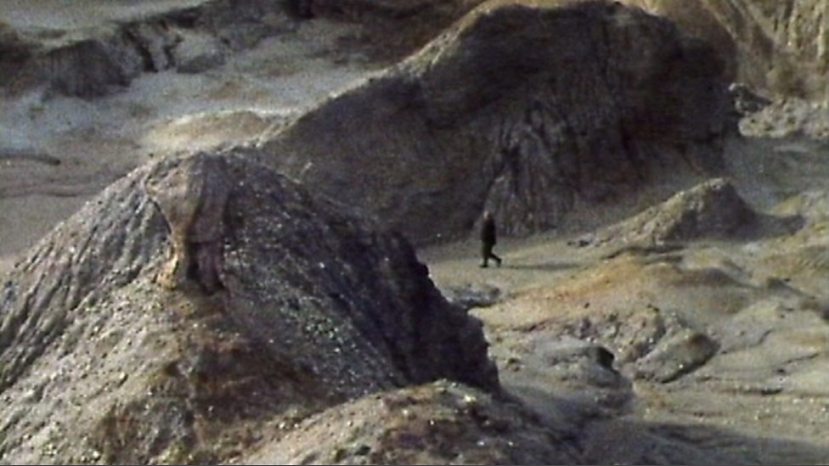 When the sun rises, Exxilon starts to prefigure another movie franchise: the Exxilons on the sand dunes, looking down on the Doctor, are exactly like the Tusken Raiders in Star Wars. Obviously this predates both films, but it gives a sense of the grammar and style Briant brings. The studio sequences, while inevitably looking less impressive than the location filming, are better than normal. Apart from the shadowy TARDIS, Briant makes the Exxilon city seem suitably grisly (helped by more great John Friedlander masks, which make the Exxilons look like Inca mummies), and the reveal of the Daleks is framed from inside their spaceship, with the Doctor and his human friends huddled outside waiting to greet what they think is a rescue mission. Even the Daleks, in Briant’s preferred silver and black livery, look better than in any previous colour episode.

Much of this seems to have been enabled by a Briant production innovation. Through the 1960s the show was recorded an episode a week, mostly just recording the script in order to avoid the need for a lot of editing. In 1970, Barry Letts instituted a change to recording two episodes a fortnight to reduce wear and tear on sets and give more time for rehearsal. Briant now institutes recording blocks where all the scenes on a set are recorded on the same day (in the future this is why Shada has all the scenes in Chronotis’s study across the six episodes, but none in Shada itself), further reducing wear and tear, and creating a more filmic shooting style. Michael E. Briant: he deserves more credit than he gets.

Next episode: Death to the Daleks – Part Two