I’m raving a bit about Michael E Briant, but he’s the first director of the 1970s to get the Daleks just right. Notice the way they twitch angrily in their first meeting with the humans, giving every impression of containing the ‘living, bubbling lumps of hate’ the Doctor so vividly describes. It’s an impression that’s reinforced when one of the Daleks, unable to exterminate, loses its wits and careens suicidally into a gang of attacking Exxilons. The subsequent image of a burning Dalek is almost as iconic as the ones on Westminster Bridge. Even the voices are finally more or less as good (or, at least, as emotive) as they used to be. To be sure, he’s helped by a script that’s somewhat channelling The Power of the Daleks, with the Daleks having to act more cautiously than usual, and in alliance with lesser beings. But the technical brilliance grudgingly admired by the Doctor is clear from the way they quickly replace their useless ray guns with ‘primitive’ projectile weapons, quickly re-establishing their deadly ascendancy. I even like the Marmite joke of them using a miniature TARDIS as a target. 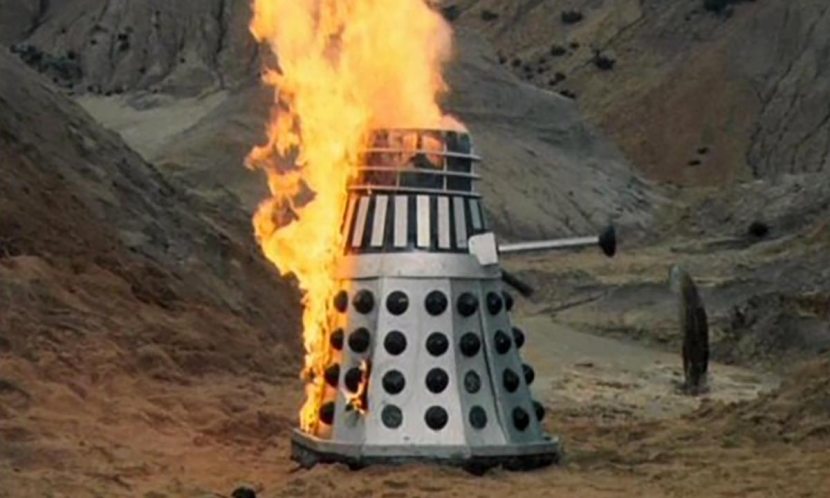 This helps to paper over some of the more tired elements of the script. I’ve already mentioned the obvious (and presumably coincidental) similarities to Colony in Space, but there are also significant re-used ideas from last season’s Planet of the Daleks, with another rag-tag group of survivors on a desperate mission trapped on a hostile planet with cowled natives. Galloway, like Planet’s Vaber, is a glory seeker willing to ignore a superior officer’s commands, while Tarrant and Hamilton, like Taron and Rebec, are an item.

The Doctor and Sarah’s relationship is interesting. Last episode the Doctor started to lose his cool with her a bit, chiding her about her sarcastic attitude towards his “driving”. This week, when the two of them escape into some tunnels she seems a lot less willing to put up with his nonsense than Jo ever was. I quite like the Doctor having to up his game when, by all accounts, Pertwee was starting to lose interest in the role, as if Terrance Dicks is compensating for Pertwee’s indifference by making the character have to work harder.

Next episode: Death to the Daleks – Part Three