The Star Trek comparisons continue as the solution to Sarah Jane’s poisoning is to teleport her down to Voga, eliminating the venom from her bloodstream in the process. It’s a dramatic, pacy way to top an episode that never recaptures the urgency of these opening minutes.

Instead, we’re plunged back into a world of Gary Gillatt’s “squabbling rubber”, as the Vogans rehearse old arguments, egregiously reminding each other of things they already know: ‘While no one suspects that Voga is inhabited, that this is the famous planet of gold, we remain safe’. Their design aptly evokes gnomes or dwarves, white-haired old men jealously guarding their gold-hoard, but the masks aren’t a patch on John Friedlander’s work (most recently creating the Davros mask), and the footsoldiers genuinely look like an army of Private Godfrey clones. 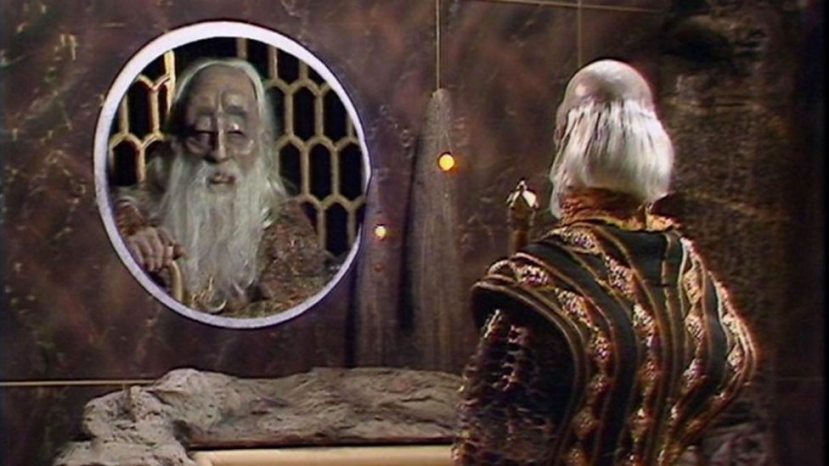 If Vogan power politics aren’t your thing there’s sadly little else to enjoy here. My favourite bit is the scene of Harry and Sarah chained up, which is charming and funny and reminded me how relatively little screen time the two of them share. The Cybermen are kept offscreen for nearly the entire episode, which is true to Troughton stories such as The Tomb of the Cybermen and The Wheel in Space, but isn’t particularly fun. When they finally do something at the end of the episode it’s mildly interesting, but the silver painted costumes look less impressive in colour than in striking B&W, and the head guns that give a pathetic flash don’t really cut it. Plus the voices are wrong, and while you can sort of get away with only three Daleks, you can’t with three Cybermen – especially given one of them is designated CyberLeader. The Cybermen come out of this worse than the Daleks came out of Day of the Daleks, which is some sort of achievement.

Next episode: Revenge of the Cybermen – Part Three