There’s something that just doesn’t click for me about this. It’s very well made, and the script is immensely witty. Borusa deservedly gets multiple return appearances because he’s such a glorious Sir Humphrey character, glibly rewriting history like the consummate slippery politician. ‘We must adjust the truth to maintain public confidence in the Time Lords and their leadership,’ he smoothly declares, as he turns Establishment fixer to whitewash Chancellor Goth’s treachery and present him as a fallen hero. Big Finish have spun entire series out of this approach.

The revelations about the Time Lords are also a bit glib. Robert Holmes drops in Rassilon, the Old Time, the turn away from the ‘barren road of technology’, and ‘after the 12th regeneration there is no plan that will postpone death.’ But none of these seem to mean much. Rassilon is just some ancient Gallifreyan who (presumably) journeyed into Omega’s black hole to pluck out its nucleus and install it under the squeaky floorboard behind the display cabinet in the Panopticon. The glut of info-dump, the technobabble and messy plotting on display in the climax is every bit as bafflingly weird as when Matthew Jacobs copies it for the TV Movie: opening the Eye of Harmony threatens to pull Gallifrey inside out; the Master needs its power to cheat his final death. 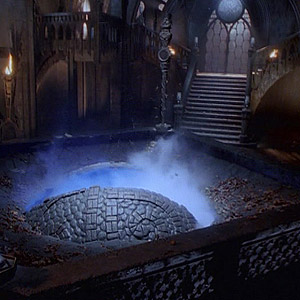 This all just seems chucked in to give the story some sort of shape and conclusion, when the earlier episodes have only been interested in subversion and surrealism. The 12 regenerations limit, which has become such holy writ that entire plots have been structured around it, is introduced here as a throwaway motivation for the Master. I’m sure Robert Holmes would appreciate the irony of a story that exists to mock doddery old fools clinging to half-forgotten myths becoming fandom’s own Book of the Old Time.

I suppose, perhaps, that Robert Holmes was going somewhere with this if the plan was for the faces in The Brain of Morbius to represent past Doctors. There are eight of them, and with Baker being the fourth Doctor it means his next regeneration is his last. But by this point Holmes and Hinchcliffe were actively looking to move on from the show, so the likelihood of them doing anything with this idea seems remote. I don’t think there was a Hinchcliffe Masterplan.

Equally, the return of the Master is a bit half-baked. With his immobile (although admittedly amazingly grotesque) mask with its Sea Devil eyes, Peter Pratt can’t do much but hoarsely swear vengeance. Geoffrey Beever’s make up in The Keeper of Traken is more effective while being equally horrid. I understand that Hinchcliffe and Holmes didn’t want to land the next production team with a new Master, and it’s hard to see any better alternative to using the Master – none of the Doctor’s other Time Lord enemies have the same weight, and introducing a random new character wouldn’t work – but this isn’t quite the Reichenbach showdown Holmes promised us.

I like The Deadly Assassin. I really enjoy the Doctor’s double act with Spandrell (who fulfils the role of one off companion, and therefore proves that while you could do Doctor Who with only Tom Baker, inevitably you’d write in a foil); the scenes in the Matrix look fantastic; the design work is largely excellent. But the story is weak, without much real mystery (the only viable assassins are Borusa and Goth, and there’s very little attempt to disguise Bernard Horsfall’s voice). It’s great that the show is now successful enough that they can attempt experimental ones like this, and Hinchliffe and Holmes can’t really be held responsible for how seriously later production teams (and fans) took this. It was worth doing, but it’s a shame we couldn’t let it lie.

Next episode: The Face of Evil