After Season 15 offered up Image of the Fendahl for Halloween, Season 16 gives us another Dennis Wheatley horror thriller set in contemporary Britain. So far, this is preferable, largely because the villains are more vivid (I love that De Vries smokes a cigarette and sips sherry during his interview with the Doctor: it’s so gloriously stockbroker-turned-Satanist) and there’s an oppressive, ominous atmosphere of empty countryside and haunting music that makes for an excellent contrast with the garrulous sci-fi of The Pirate Planet.

Not that the script doesn’t have its share of wit. It’s not as brilliant as The Pirate Planet, but David Fisher is another great addition to Graham Williams’ roster of writers. I particularly like how he develops the Doctor’s relationship with Romana. After a frosty beginning, they seem to be enjoying each other’s company with a nice line in friendly one-upmanship. The Doctor takes an early lead by being right about Romana’s choice of shoes.

However, there’s no sense that Romana isn’t able to hold her own. At the outset, she suggests she would be capable of carrying on with their mission if something happened to the Doctor – which prompts him to reveal the truth: she’s not working for the Time Lord President but the White Guardian. This is both a chance for stragglers in the audience to get a quick recap about the Key of Time mission, and for Fisher to give the Black and White Guardian’s more grand-sounding (and less racially unfortunate – I wonder if in 1978 anyone would have picked up on that) names: the Guardians of Light and Darkness in Time. The fannish bit of my brain also wants to join the dots between the Doctor’s talk of the universe being ‘in danger of eternal chaos’ with the entropy the Logopolitans are battling.

This is quite the story for strong female roles. Tom Baker can, wonderfully, only gawp as Beatrix Lehmann witters on about old surveys and Cornish fogous. Susan Engel is much more glam, lightly flirting with Romana as she dismisses the doctor as a ‘typical male’. It’s also got some very creepy moments, which (perhaps mindful of the steer from above) are never allowed to go on too long or be too disturbing. The spooky cowled figure looming in the dark near the start of the episode quickly steps into the light to reveal the jowly, unscary face of De Vries. And we never see what the Doctor does that scares Romana into falling off a cliff – perhaps the feeling was showing the Doctor being frightening wasn’t the image they wanted to leave kids with. 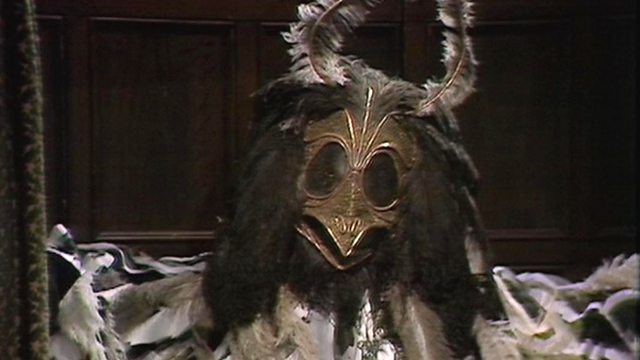 Next episode: The Stones of Blood – Part Two