Wisely, for a story with so many doubles, David Fisher keeps the fairytale plot very straightforward. Less impressively, some of the dialogue seems to have been duplicated – the Archimandrite (yay, Cyril Shaps!) has the same conversation, about having to choose another king should the Prince not show up, twice in quick succession with Count Grendel: even making allowances for the “casual viewers” this feels a bit like overkill. 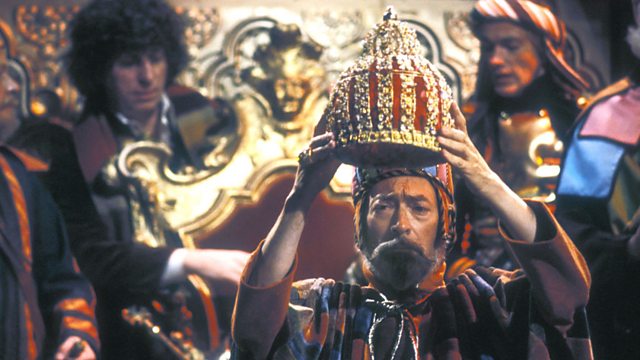 This isn’t really one to watch for the plot, though. Rather, for some great, subtle characterisation that does more than anything to distinguish who’s a human from who’s an android. Lamia, who might have been a thankless bit part, becomes a fascinating secondary personality with a convincingly complicated relationship with the Count. She’s jealous of Romana and protective step towards Grendel when he talks of marriage (apparently he ‘once showed her a certain courtesy’), while also seeming resentful and bitter. To give him some credit, Grendel looks a bit contrite. He’s such a superb villain, completely realised by Peter Jeffrey: conniving, condescending, delighted as a naughty schoolboy when taking a cheeky seat on the throne, and face clouding with rage when his plans fail to come together at the coronation.

The cliffhanger suggests an emerging Fisher trope: the Doctor unexpectedly attacking Romana. This is more shocking than the (implied) end of The Stones of Blood – Part One, as the Doctor seizes the sceptre to club down “Princess Strella”. It’s not difficult to guess what’s really going on, but it’s a great moment to end with.

Next episode: The Androids of Tara – Part Three