‘Once I too had life.’ Compared to the normal pattern, this third episode definitely feels like it’s stepped up a gear from the opening half. Maxil, previously only interesting because he’s played by Colin Baker, finally does something not completely useless and proves that Nyssa was, in fact, telling the truth – that someone in the High Council is a traitor, plus the Doctor is still alive. This is enough to prompt the Castellan to actually start doing some Castellanning (perhaps he wasn’t feeling well – Paul Jericho sounds a bit hoarse). The result is an episode that, fitfully, starts to make something of the conspiracy mystery.

Sadly, the identity of the traitor has always been obvious (it’s Hedin) despite a token attempt to disguise his voice. So there was never really much mystery at all. Sensing the net tightening, Gough makes Hedin reckless (signified by increasingly urgent hand waving and gadget fiddling in his scenes with Omega), and, rising to it, Omega also begins hand acting frantically, stroking the chin of his mask and saying, ‘Hmm’ and emphatically waving his arm as if to sweep away Hedin’s objections (or possibly some stray strands of the Matrix web).

Meanwhile, Nyssa and her new gal pal Damon sit round her bedroom admiring her pink pottery (not a euphemism). I don’t fancy much for this new friendship though – once Nyssa realises Tegan is back it’s obvious she has eyes for no-one else. Desperate for a reunion, she overrules the Doctor’s objections and carries a gun to shoot down any hapless guard who stands between her and Jovanka. Meanwhile, Tegan has fallen into the dramatically waving hands of Omega and become a hostage with which he can blackmail the Doctor into doing his bidding (whatever that is). 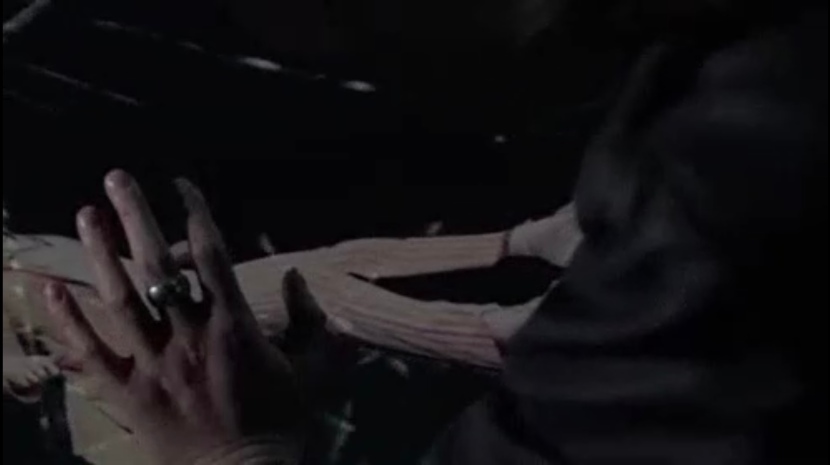 I think this is a particularly weak element of the script. Johnny Byrne does nothing to tackle the displeasing coincidence of both Omega and Tegan being in Amsterdam at the same moment. There are obvious script fixes Saward could have come up with: have Omega deliberately go to Amsterdam to grab himself the Doctor’s companion as a hostage. Or have Tegan going to Amsterdam to follow up on some mysterious happenings (the approach RTD took when writing Donna back in for Partners in Crime).

The other weak element is the script’s lack of clarity why any of this matters much. Borusa bleats about ‘full bonding’ condemning ‘untold billions to destruction’ but not why or how. The cliffhanger, ‘It’s too late, Omega controls the Matrix!’, might give a few of the vintage fans permission to squee, but I suspect most viewers just wondered: “So what?”. It’s been accurately pointed out elsewhere that apart from the human interest stuff in Amsterdam (and obviously the Doctor being condemned to death) there’s nothing that really sells the scale of why this is a crisis.