‘It all rests with you, Sarah. Your greatest challenge. The hardest thing you’ll ever face in your life.’ The reason this works as a Sarah Jane Adventure is that the Doctor is a red herring, pretty much only there to run round with the kids and remind Sarah that she knows how the Trickster operates. Cleverly, he’s kept trapped in a separate pocket of time for most of the episode, which means Tennant gets to dash around looking cool, doing Tom Baker impressions and being brilliant one last time – these were, after all, his final scenes recorded – while Sladen gets the meat of the story.

If The Temptation of Sarah Jane Smith was her Father’s Day this is her Human Nature: a love story, with a glimpse of the happy future she might have had as Sarah Jane Dalton if she wasn’t already committed to defending the Earth. It helps that Nigel Havers is every bit as compelling as Jessica Hynes in the doomed lover role, treating this with great sensitivity and no sense of dumbing down his performance for a CBBC audience. Between him and Sladen, (and with perhaps Tennant’s best ever ‘I’m so sorry’), these scenes carry an emotional heft just as powerful as the equivalent moments in Human Nature.

Then the final scenes are as beautiful an ending as Tennant could have wished for: children run excitedly round his TARDIS, while he, suspecting what’s waiting for the Doctor at the gate, puts on a brave face while asking Sarah Jane not to forget him. Sarah’s abrupt exit at the end of The Hand of Fear has already been redressed twice over, in K9 and Company and School Reunion, but this finally closes the door on it. Lovely. 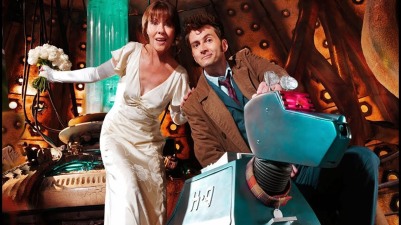 Dr Who will return in The Waters of Mars

Next Time: The Eternity Trap