‘I think what you experienced was a stone tape manifestation.’ They missed Halloween thanks to the wedding, but this is a fast follower, a ghost story complete with spooky point of view shots, a sobbing girl, a mysteriously rocking horse and a gothic secret passage. All the cliches are present and correct. So too is Sarah Jane’s Doctorish scepticism, although I am surprised she isn’t more forthcoming about her own encounters with the ghosts of N-Space.

If I have a problem with this, it’s that it’s all very safe, with none of the genuinely unsettling atmosphere of older kids’ TV. Even as recently as 1993, RTD’s Century Falls was much creepier. This is to Sapphire and Steel as Scream is to John Carpenter’s Halloween: glossier, but hard to imagine it would send any traumatised kids screaming into their parents’ rooms in the dead of night. 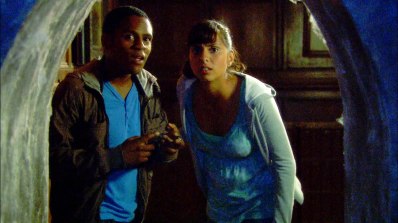 But old fogey nostalgia aside, this is nice enough. It has the return of Floella Benjamin as Professor Rivers; Donald Sumpter as a Restoration alchemist, and Clyde and Rani taking the lead (Luke has refused to go ghost-hunting as people who believe in ghosts are ‘still living in the Dark Ages’ / Tommy Knight needed time off for his exams).