‘Anything I do just makes it happen.’ This one was trailed as ‘the scariest to date’, but despite the presence of 28 Days Later style running zombies (except transformed by a single drop of water rather than blood), the visceral horror is predictably subdued. Instead, there is existential dread at the terrible inevitability of events, as both the crew of Bowie Base One and the Doctor confront the path that’s set out before them.

It’s consciously written as a counterpoint to The Fires of Pompeii, explicitly referenced in the Doctor’s heart-to-heart with Adelaide. RTD has flirted with “future historicals” before, like the Doctor’s reluctance to interfere in a first contact scenario in Aliens of London. The shorthand technique of using Wiki entries to show this is recorded history (and changes to time) works well enough, but it’s Tennant’s performance that really sells it. He’s an experienced hand at playing haunted, but excels himself in this, looking gaunt and soul sick as he forces himself to listen to the mortal struggles of the Martian pioneers, desperately trying to second guess himself as he learned in Pompeii that any attempt to change history made it instead. 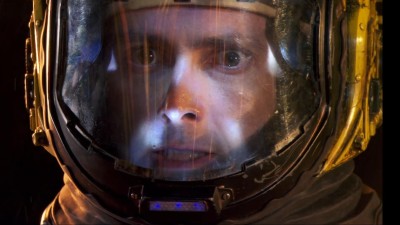 The difference was there he had Donna to stop him going too far. Here, alone by choice, unsettled by the Four Knocks prophecy, made weak by time and fate, he’s terrible on the rebound. I think the script plausibly makes him snap, fighting back against predestination because perhaps if he can save Adelaide then he can save himself. Tennant is excellent in the final scenes in the base, eyes wide and mad.

I’m less sold on what comes next. I can just about buy the Doctor drunk on his own chutzpah, boasting about cheating fate, but all this guff about ‘the little people’ and ‘the Time Lord victorious’ reeks of over-reach, and Adelaide’s suicide is borderline inappropriate for the show. It almost gets away with it because the preceding hour has been so powerful, and the immediate pay-off, the Doctor guiltily fleeing the crime scene witnessed by a spectral Ood, but still defiant, is a good lead into The End of Time teaser. But it’s trying to do too much in too short a space of time, and really needed to be toned down or get an episode to explore (what else might the Time Lord victorious decide he can do? Couldn’t that have been the cause of Gallifrey returning?).

Over-egged ending aside, this is a strong replay of The Impossible Planet’s base-under-siege with the Flood standing in for Satan and a last-minute TARDIS rescue for the survivors. Lindsay Duncan has the right gravitas for Adelaide, the only other proper character. The rest of the crew are briefly but effectively sketched (and Aleksander Mikic has to deliver some tough expository dialogue), in the best traditions of these sort of And Then There Were None stories. Its proximity and lead-in to The End of Time lends it greater weight than Planet of the Dead. Ironic, though, that this should be the one dedicated to Barry Letts as it’s one of RTD’s least Letts-like stories.

Dr Who will return in Dreamland

Next Time: The Gift